A PLACE FOR EVERYONE


In Belgrade, we are a center of knowledge, culture and entertainment.
In Serbia, we are the leading public library.
In Europe, we are part of the family of the most modern public libraries. 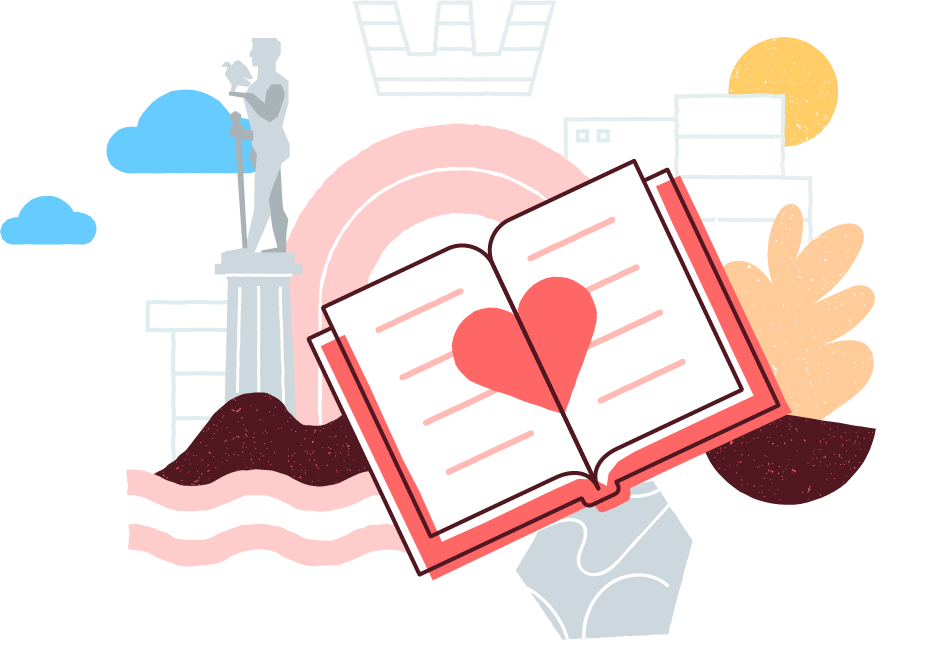 With the ceremonial consecration of the Municipal Library and Museum, on January 11th, 1931, Belgrade got a modern city library, a whole century after the first Lending Library of Gligorije Vozarović.

The Municipal Court of the city appointed Marija Ilić Agapova, PhD as a librarian. Following the example of other European libraries of the day, books were classified and arranged according to the principles of the Universal Decimal Classification and training courses for librarians were run for the first time. In the same year, the first public Children's Reading Room in the Kingdom of Yugoslavia was opened.

The Library was open to the general public, and anybody could use its resources. Books could be borrowed with an ID card (a library card) and were lent out free of charge. Library cards for children were embellished with an illustration by Beta Vukanović and were inscribed with an excerpt from the 1924 Geneva Declaration of the Rights of the Child.

After several moves, in May 1935, the Municipal Library and Museum moved to a building in Ulica kneginje Ljubice no. 1, in today’s Zmaj Jovina Street. The 1941 German Bombing of Belgrade caused untold damage to the Library, reducing the building to rubble and destroying invaluable cultural heritage. As a result of Nazi firebomb raids, the roof of the building that used to house the Library at the time was destroyed by the flames, along with its last floor. The Children’s Library was in operation throughout the war. Library services became available to other users in early 1943. After World War II, the Library started its regular operation on January 18, 1945. Library holdings increased from 20,000 units at the war’s end to 39,813 in 1948.

Until 1953, the Belgrade City Library didn’t have a complex internal structure. Then, departments were formed in 1954, and the Library Centre was established in 1955. The goal was to create a single network of public libraries across municipalities. Under the provisions of the Libraries Act, the Belgrade City Library has been designated parent library for libraries operating in the territory of the City of Belgrade since 1961.

In October 1986, Library moved into new premises, the building of the former Serbian Crown Hotel located at Knez Mihailova 56, where it is still situated. Desanka Maksimović, a famous Serbian poetess, opened the new building of Belgrade City Library at an official ceremony.

In her speech, she said: “If we had searched for three centuries where to put it, we would not have found a better place for it. The poet Milan Rakić is looking at it from the front. Not far away on Kalemegdan are Branko Radičević, Vojislav Ilić, Bora Stanković, not to mention all those whose works will live on for centuries under the roof of this Library.”

The Belgrade City Library was the first public lending library in which cataloguing was computerized in the Socialist Federal Republic of Yugoslavia.

Following a referendum held on January 9, 1989, employees of 12 out of 16 municipal libraries (joined by an additional two afterwards) voted in favour of integration, turning Belgrade City Library into a single network of libraries.
In the nineties of the 20th century, the number of registered members and acquired titles dropped significantly. Still, the number of books read remained almost the same. During this period, the Belgrade City Library, together with the network of municipal libraries, had the most developed cultural and educational work in Serbian librarianship. Systematic monitoring of the reading population of Belgrade has been started. The periodical newspaper “Novine beogradskog čitališta” started being published in 1991.

The revision of General Holdings began in 1997, without interrupting the work with users. The Internet reading room was opened in Knez Mihailova street. Electronic protection of the collections in free access was built-in at that point.

On January 11, 2001, seventy years since the establishment of the Belgrade City Library, Library Day was solemnly celebrated. On that occasion, a book of selected works of the Library’s first manager, Marija Ilić-Agapova, was published, and an award named after her was established for the best librarian in Belgrade. Two years later, as part of the Days of Belgrade celebration, the renovated Department for Old and Rare Books and Books about Belgrade was opened at Zmaj Jovina 1. In July of the same year, as part of the project Beautiful Serbia, the facade in Knez Mihailova street was among the first renovated. The Periodicals Department continues its work in the renovated premises and also many branches of municipal libraries. For the first time, after many years, the standard of optimal procurement of books for all funds has been reached. The results of multi-decade projects were completed and published, the second volume of the Structure for the Bibliography of Yugoslav and Foreign Books on Belgrade (2003) and the two-volume monograph Streets and Squares of Belgrade (2004/5).

The first phase of implementing the library software program BISIS began in 2005. The first issue of the new series “Novine beogradskog čitališta” was published in the same year.

Special attention is paid to old and rare library materials collected since the Library’s first days. From 2012 to 2017, 31 copies of old cartographic material and 46 copies of old and rare books and periodicals (XVI-XIX centuries) went through the conservation and restoration process. Currently, 1,103 titles have been registered in the Electronic Register of old and rare library materials. This fact makes us the third Library in Serbia in terms of the number of recorded materials, after the Matica Srpska Library and the National Library of Serbia.

The Decision on the declaration of old and rare library material as a cultural asset of exceptional importance published in the Official Gazette of the Republic of Serbia (No. 35/2021.) gave special recognition to the Belgrade City Library.

Since 2005, the Belgrade City Library has been actively participating in numerous domestic and international professional projects. We would especially highlight the projects supported by the European Union -AccessIT, AccessIT plus, Europeana Awareness, Dissemination and eXploration through Libraries, LoCloud, Re-designing and co-creating Innovative Cultural Heritage Services Through Libraries, Enhancing Key Civic Competences for the Post-truth Era: News Literacy and Critical Thinking, as well as the BISIS 5 library information system development project, which the Ministry of Culture and Information has regularly supported since 2017.

The organisational structure in Belgrade City Library Headquarters is divided into the following sectors:

Municipal Libraries in the Belgrade City Library network are the following: 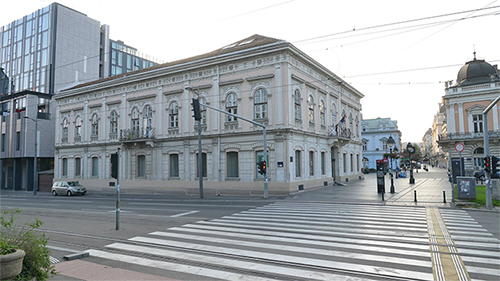 Since October 1986, the Belgrade City Library has been located in Knez Mihailova 56, in the building of the former Serbian Crown Hotel. The hotel was built around 1867 as the most modern, representative and best-equipped hotel in Belgrade at that time. It was most likely built by the Krsmanović family of wealthy merchants. 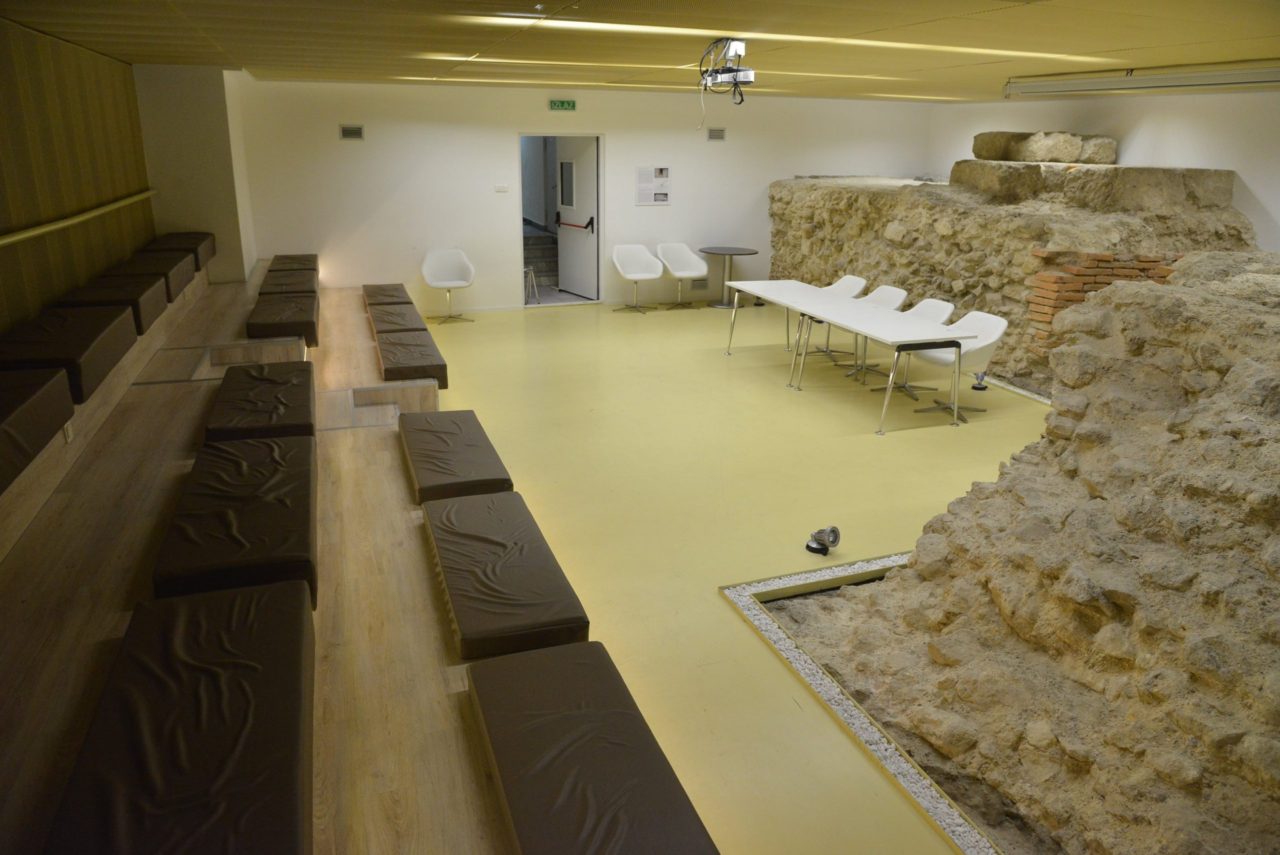 The Roman Hall is a unique venue with an in situ archaeological site and a lapidarium displaying exhibits such as statues, altars, stelae and other 2nd to 4th-century AD stone sculptures and ceramics originating from the Singidunum area and the Danube Basin in the Roman province of Upper Moesia. 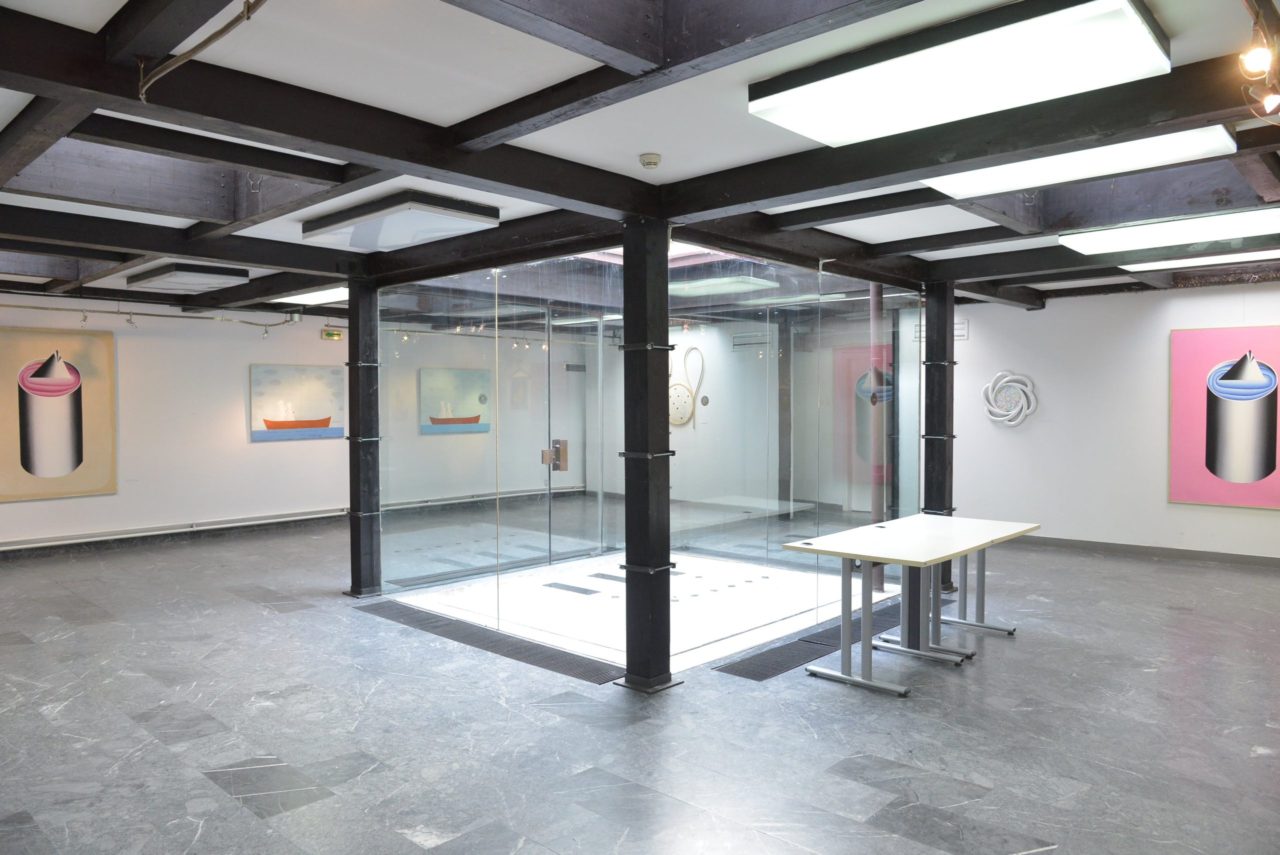 Since its establishment in 1986, the Atrium Gallery has quickly become a respectable exhibition space and occupies an important place on the city's cultural map. The art program of the Atrium Gallery fosters creativity in various fields and forms of contemporary visual art. 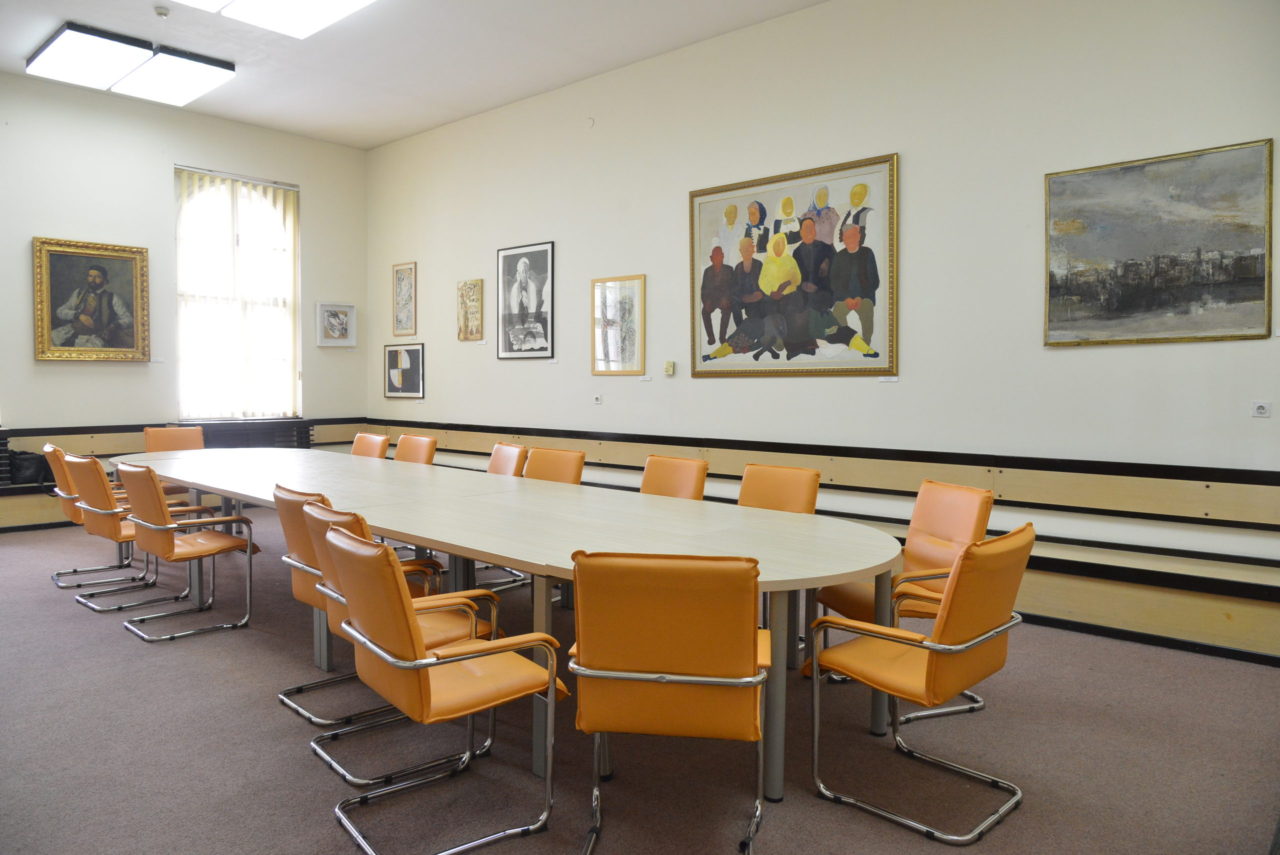 Vuk's Hall is located on the first floor of the Central Library building. It is an actual gallery that exhibits paintings depicting Belgrade. It has been named after its central painting, a portrait of Vuk Karadžić, the work of Beta Vukanović. 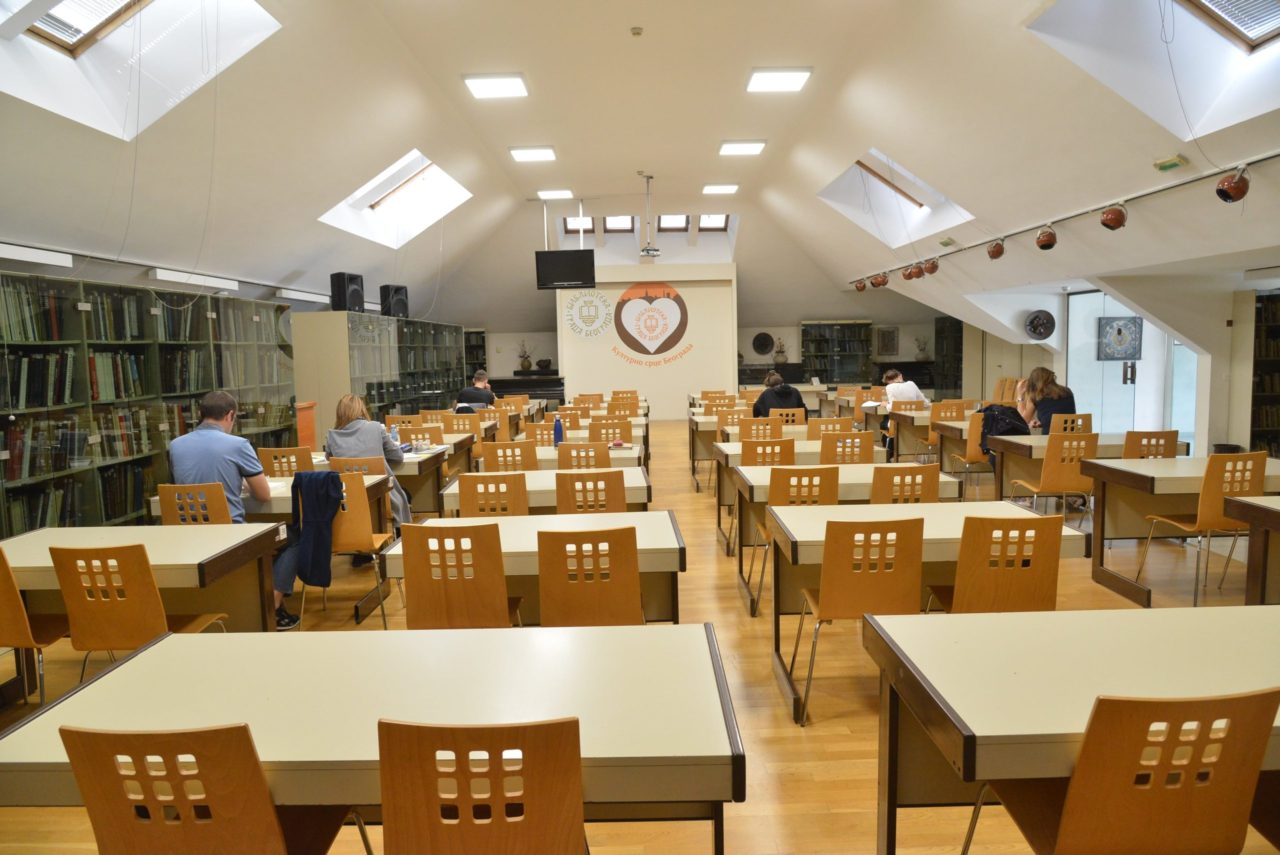 The Arts Department Reading Room is located on the second floor of the Belgrade City Library building at Knez Mihailova 56, and it occupies an area of ​​about 250 m². The specific and unique collection is open to all Library users and contains over 18,000 publications on various subjects such as fine and applied arts, music, photography, theatre, film, archaeology and ethnology.